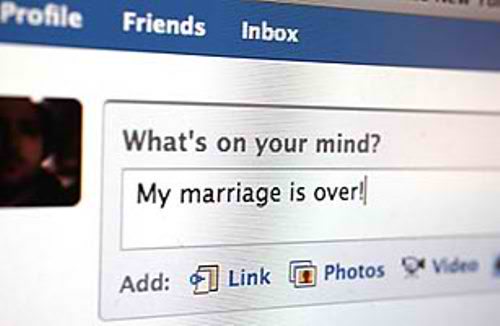 It’s hard to remember right? Because Facebook has infiltrated almost every aspect of our online behaviour and our real-time relationships.

As a relationship therapist, I’ve certainly noticed how Facebook makes its way into the lives of my clients. There’s not a week that goes by where a client doesn’t raise Facebook for some reason or another.

Facebook’s influence is global and it’s changing relationships on a fundamental level. I see it changing the foundations of how we relate today. And while it’s an amazing technology that helps us stay connected with friends and family, no matter what the distance you share, I’ve also seen the destructive side of Facebook and how it can lead to ending relationships.

The line between private and public is becoming blurry

I recently found out on Facebook that a couple I know had broken up. Nothing unusual about that, except for the way I found out.

Neither of them made an announcement or announced their changed relationship status on Facebook. Instead I noticed that one half of the couple had formed a very close relationship with someone else.

In fact, as I started to look back through the timeline of my friend, I realised that this was more than a friendship. This was a very public love-affair for anyone connected to this person could witness. It was compelling viewing and as I confirmed with other friends, most were shocked and amazed at how indiscreet this new love affair was.

This for me captures the essence of how Facebook is changing relationships.

What was once a private matter, that you may have heard about directly from a friend, or through the grape-vine from another friend, now becomes very public information.

Facebook is making the boundaries between public and private very blurry.

These new rules of engagement that include shifting boundaries between our public and private lives are radically affecting relationships.

One of the most common feelings I hear about is Facebook jealousy. A recent study found that excessive Facebook users are more likely to connect or reconnect with other Facebook users, including previous partners, which may lead to emotional and physical cheating.

I also think the transparency that Facebook offers- the ability to ‘spy’ on the lives of our friends and partners that has never been possible before, is problematic for some people.

Those that tend to feel insecure, lack confidence, or have had a history of cheating in the past are much more prone to feelings of jealousy that rise from tracking the interactions of friends and partners.

Can you imagine how it feels to watch the unfolding love-story of your ex-partner in front of lots of people? I’m sure it wouldn’t be comfortable.

Another recent study tracked the emotions of Facebook users, and envy was a common experience.

Viewing holiday snaps, happy family photos, and friends at fun events induced feelings of envy for the viewers. The Facebook users also indicated they found using Facebook a stressful experience at times and were likely to use it less because of their negative feelings.

However, Facebook is not all bad for relationships. In fact, another study showed that posting can make you feel less lonely.

So how can we reconcile these different results from various studies? Perhaps more study needs to be done, but it seems that if you are an active participant on Facebook- meaning you tend to share- that you may be happier or better off than those that just observe the updates of others.